The “Twelve Paintings – Spring Exhibition” will be Yates’s first online exhibition following the cancellation of planned shows in Switzerland, the South of France and London this spring due to Covid-19.

Taking inspiration from numerous intriguing sources including postcards from Alcatraz prison, the golden age of British wrestling and the poetry of Milton, along with Yates own experience of being expelled from school for writing poetry in a mathematics examination, the twelve works chosen for this online exhibition reveal the range and depth of one of Europe’s most original and least public artists.

Paul Yates creates art, sculpture, poetry and film under the Patronage of Lord and Lady Glentoran.

“The paintings of Paul Yates attract a discerning following of international connoisseurs of the avant-garde seeking the truly original. These twelve works reflect his extraordinary intuitive surrealism and, in the grip of the present pandemic, remind us of the human gifts of imagination, the power to dream and the power to wonder.”

Paul Yates Art is committed to donating a percentage from sales to Medicines Sans Frontiers / Doctors Without Borders.

The exhibition can be found at www.paulyatesart.com from Friday April 17th.

The works included in the Spring Exhibition are:

Paul Yates painted single chairs as far back as 1974. The unique nature of a lion tamer’s chair holds a strong fascination for him. Yates’s poem of the same title further explores the concept.

This painting was made in response to a true story. A donkey isolated in remote countryside during winter sought shelter in a derelict cottage. Hungry, the animal entered the bedroom and pushed its head through the bars of a bedstead, tore open the worn straw mattress beyond with its teeth and ate the contents. Tragically the donkey’s head became trapped between the bars and it was unable to escape. The following spring the animal’s petrified corpse was discovered, still standing, with its head held fast between the bars of the bedstead.

A reference to Giorgio de Chirico the Italian painter who strongly influenced the early surrealist movement. The figure in this painting appeared to the artist in a dream and claimed to be the ghost of De Chirico, growing younger every day and showing off with tricks of the light.

4. REACHING FOR THE MOON

This painting concerns an old English folk tale. A group of village idiots gathered on a bridge over a river at night observe the reflection of the moon in the water and believe the moon to have fallen from the sky. They form a human chain to stretch down and rescue the moon. Just as they get within reach, the anchor man on the bridge advises the others to ‘hold tight’ while he raises his arms to relieve cramps in his shoulders.

A scarecrow observed on the coast of the Kingdom of Fife in Scotland. The light playing off the sky and ocean setting the figure centre stage in that massive drama of wind and wave power that empowers the stuff of legends and folklore.

Tattie-Bogle figures have featured in Yates’s poetry and his short story of the same name was recorded at the BBC by Gail Porter.

British masked wrestler, Kendo Nagasaki, collaborated with Paul Yates on a number of projects, notably Yates’s international award winning film with BBC 2 Arena, MASTERS OF THE CANVAS. [See BBC iPlayer for details.] This painted collage was inspired by a defaced and weather worn wrestling poster on an exterior wall of Hanley Town Hall, the historic crucible of British wrestling.

From the KLIN series, an Inuit word meaning ‘remembered snow. ’Yates began painting snowheads and snowmen in 2002. Such figures are familiar to us, indeed the process of making them is likely the one deliberate act of sculpture making most of us have engaged in at one time or another. Yates’s snow figures offer us a way of rediscovering these figures, seeing them as individual entities often with distinct personality characteristics and mirroring various aspects of the human condition. This work depicts a snowman caught in the fury of a snowstorm, almost phantom like he is manifested within the very substance and chaos from which he originated.

From the TABULA RASA series inspired by the following incident. When a young teenager Yates was expelled from high school for writing two poems during a mathematics examination instead of answering the questions. Before leaving

school he was forced to write on a blackboard one hundred times, I must not write poetry in class. A week or so later the poems concerned were broadcast on BBC Radio and Yates was reinstated at his high school. This painting features a blackboard struck by prisms of sunlight revealing the ghost writings of previously erased lessons re-imagined with something of the spirit of illuminated medieval manuscripts.

9. RORSCHACH OBSERVES LUCIFER BREAKING HIS FALL UPON A RAINBOW

A masterly orchestration of, colours, tones and textures across a variety of medias to create a stunning harmony of effects. A Rorschach ink blot snapshot of the legendary fall of the ‘light bearer’ Lucifer.  I sense the scale and drama of Milton’s Paradise Lost [a poet much respected by Yates.] and curiously, Lascaux tones, as if the bearing of silent witness to a cosmic event by a primitive mind. Nightmare, dreamtime and other such terms seem very fitting to associate with this intriguing work which rewards close study with constant surprises.

From Yates’s ORIGINAL CAST series, characters real, imagined and re-imagined. This work was inspired by the memory of a favourite teacher from the artist’s primary school whose beauty and warmth obviously made a lasting impression. The colour coding, at odds form and proportions and deft use of shadow, results in a really quite sophisticated portrait which successfully reconstructs the artist’s childhood vision.

These paintings were inspired by a postcard the artist’s daughter bought when she visited Alcatraz Federal Penitentiary, in the U.S.A. The card featured plaster heads employed by three prisoners in 1962 to fool guards into thinking they were asleep in their bunks when they were actually in the process of escaping. Yates has built on these forms to create a triptych of compelling classic portraits labelled with each prisoner’s penitentiary I.D. numbers and the dates of their original incarceration.

Inspired by the artist’s observation of a man in the town of St. Andrews in Scotland drawing chalk circles in the middle of Market Street. Moving along the street the man would occasionally stop and seem to take reference from the first-floor windows of shops before crouching down again to draw more chalk circles. His mysterious behaviour seemed like some kind of performance art. What the man was actually doing was marking the positions for the huge metal feet of mechanical fairground rides that would be set up for the annual Auld Lammas Fair. The clearance for such rides being estimated by the man’s memories of previous years’ set-ups and their ‘swing’ proximity to first floor windows. 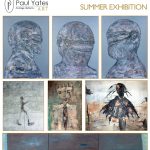 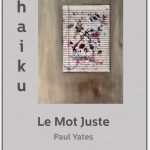 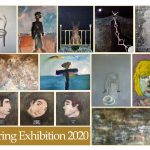 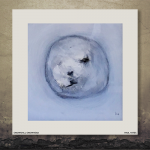 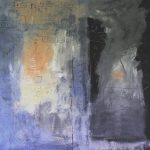