The genesis of the LEGION series originated in an incident the artist recalled from kindergarten in his poem, BOX HEAD.

At kindergarten the artist and his classmates made robot heads from cardboard boxes as a Halloween project. One boy continued to wear his robot head long after Halloween.

Wearing it to and from school every day, hanging it up in the school cloakroom, wearing it in the playground during breaktimes, taking it to church with him, sleeping in it at night.

Eventually his mother destroyed his robot head. This memory sowed the seeds of the Legion series of works.

First imagined in 2007, LEGION is now re-imagined with seventeen new works of highly diverse media and scale for 2021.

For many years Yates’s work rarely entered the commercial marketplace with pieces being acquired directly from his studio by collectors, limiting public view

The original poem by Yates:

Too big, the cardboard box sat high on his shoulders

So that he could only see out through the mouth slit

And not the two crudely cut triangles above intended

As eye holes. The boy had made the robot head in

School for Halloween, days later when his classmates

Had abandoned or destroyed their robot heads he

Continued to wear his. In the mornings he wore it

Walking to school, hanging it up in the cloakroom

When he went to class. At lunchtimes he wore it in

The playground feeling protected from the wind and

Rain and distant from the sights and sounds of the

Other children playing. Gazing out from a balmy

At home at mealtimes the boy would tilt up his robot

Head and feed himself jerky mechanical forkfuls of

Food, join two paper straws together to drink his milk

And imagine he was refuelling. On Sunday he wore

His robot head to church, setting it next to him on

The pew, turning it face down to Join in the prayers.

That night the boy fell asleep wearing his robot head.

His mother slipped into his room and removed it, took

Then pressed it deep into a neighbour’s bin. Next day

For a while after that, from a distance, the boy would

Suspect the corner of a cardboard box in a shop or

Elsewhere was his lost robot head, but it never was.

The boy never made another robot head, it wouldn’t

Have been the same he said. 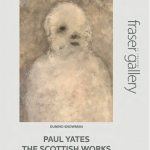 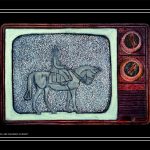 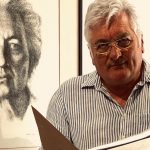